Mag of Holding – Breath of the Feywild Print & PDF

When one imagines the Feywild, they could be forgiven for conjuring mental images of archfey and other excessively powerful fey creatures. But not all denizens of the Feywild wield high-level magic or carry legendary magic items. Some of the more coy creatures of the Feywild—and contrary to popular belief there does exist such creatures—and the minors of fey societies might possess less impressive magic and carry upon them magical trinket of the more subdued variety. The Feywild is filled with magic, true, but not all of it is is wonderfully powerful or, need we say it, wild. As any well-read scholar will tell you, ferociousness and luxuriance hold little value where nothing is tame. Just as light could not exist without darkness, and heat could not exist without cold, so the feywild could not exist with some measure of order…no matter how small.

Welcome traveler to the wonders of the Fey realm where the air tingles and the earth resonates with magic.

Rest your weary feet and gaze upon Mag of Holding – Breath of the Feywild. Within these pages you will explore the world of fairies but beware in this place not everything is as it seems for this is a place of illusion and trickery. Amongst these pages you will encounter the powerful magics of Fey artifacts, strange creatures born of wild magics and stumble into adventures beyond belief. So, adventurer go forth and wander among the beauty of the Feywild but beware not all is as it seems in this world. Keep that which you value close and your words closer for a deal with fairies can be a dangerous bargain. – Kyle Gray

Feast your eyes on the wondrous Fey! From might archfey, remarkable familiars, and fascinating creatures to deceptive clearings, sneaky leprechauns, and incredible spells!

Ready to meet the Witch?

An Elder of the Fey. One of the oldest creatures of the Feywild, the
Witch of the Willows, or Old Lady Willow as some call her, has seen
the history of her native plane unfold through her long life.

You will find yourself

in a realm of wild beauty. Of rolling grasslands, wondrous cities, and ancient woods. But behind every beautiful beast, balmy being, and beguiling blossom lurks danger.

Great encounters such as:

An arandaal is an animalistic fey creature usually native to the Feydark, which sprawls beneath the fey realm. Accounts very wildly on the physical appearance of the arandaal to the point where those who have spent time studying them tend to agree that the beasts don’t ever truly manifest physically. Even accounts from those who have seen the same arandaal often disagree on the shape and size of what they encountered.

Neutral Good Sprite Ranger (age 31) Nyra Moonfig, or Figgy to her friends, sports a pair of bright green dragonfly-like wings. Her mother used to call them her most valuable assets. She is strong in her convictions and refuses to back down when defending something or someone she believes in and remains fiercely loyal to anyone who has gained her trust. Those who cross her only know her as the sting of an arrow. She is the self-appointed protector of the plants of the Feywild, not abiding any undue harm to come to them unless it is part of the natural order of things.

Drock Dinya the leprechaun was an avid treasure hoarder. He started out like most of his kin, with nothing more than a small pot of gold to his name. Until the accursed day some humans captured him and took even that away from him. Left alone and penniless in the wild, the leprechaun’s heart hardened. Where most of his kin would bounce back from such an encounter or take their revenge in a humorful way, Drock decided to take a different path. He vowed to utterly destroy those who had wronged him—to take everything from them.

Witch of the Willows

The Witch of the Willows started life as a dryad linked to a willow tree deep in the Feywild. Some say she was the first dryad, but her long life means she has grown far beyond these humble origins, growing in power and knowledge, ascending to heights of power near that of an archfey

These smaller mimics like their larger relatives are shapeshifters able to take on the form of small objects in order to surprise their prey. Common forms these mimics take range from coin purses, bottles, and doorknobs where they know they can find prey

Annette Glassriver is a halfling who was kidnapped as a child and whisked away into the Feywild. There she and her twin sister Lillian were held captive by a coven of hags for several years. In that time, she was given an old lyre and made to play for the entertainment of the hags. The twins spent years in the Feywild, assisting the hags with their dark rituals, entertaining them with their music, and planning for the day they could escape.

Step up. Step up. Pitch your tent, park your cart, hitch your griffin…or whatever it is people ride around here. Mind the dream blossoms lest they put you to sleep, rendering you helpless prey for the moss behemoth. As the saying goes, ‘the only bad customer is a dead customer’. Or was it, ‘the only sad custard is a blended custard’?

This time Kayleigh had the most laudable honour of chatting with Ginny Di. A creator of such stature requires no intro but for those peasants unfamiliar with her work, Ginny Di is a geek culture polymath (read goddess), perhaps best known for her YouTube channel where she covers many things including really helpful topics around DnD. Ginny is a writer, musician, comedian, cosplayer, artist, roleplaying wizard, and more than we could possibly list in one Mag of Holding!

And so much more… 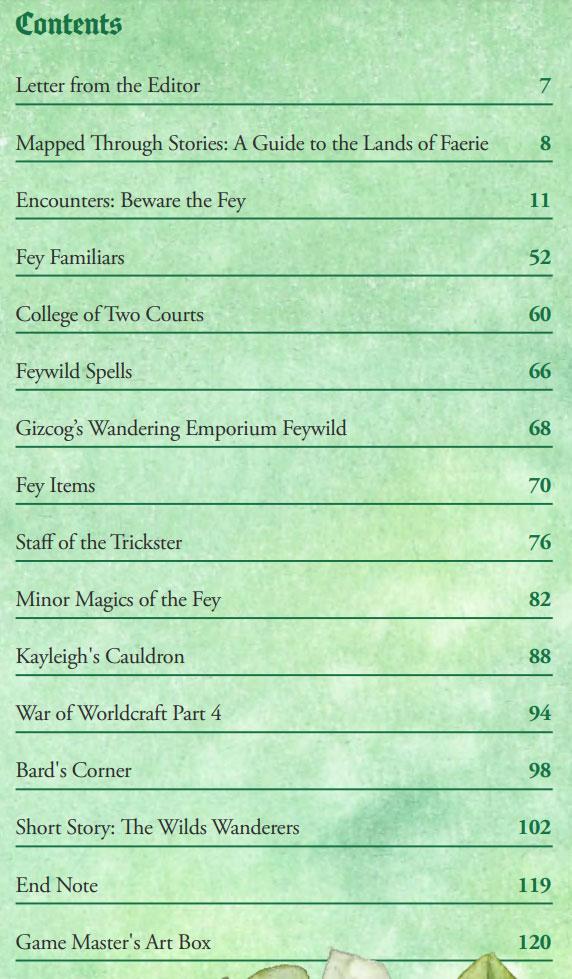 Get your copy now!

You will find yourself in a realm of wild beauty. Of rolling grasslands, wondrous cities, and ancient woods.

But behind every beautiful beast, balmy being, and beguiling blossom lurks danger. For all its dazzling splendor and exquisite delight, the feywild roams along the edges of chaos.

‘Tis certainly no place for the weak of mind, faint of heart, or lost of soul. So then, guard your mind lest the fay misread you. Guard your heart lest the way mislead you. And guard your soul lest the wild mistreat you.

There are no reviews yet.