A Monstrous Escape is a unique short adventure where players get to play as monstrous flesh golems stitched together by Victor Schlägerman. As Victor’s test subjects, they must escape a castle full of twists and horrors. This adventure is perfect for running at Halloween or for adding an element of horror to an existing campaign setting. It can be run as a one shot or over several sessions. The adventure references the coal-mining village of Dunkeldorf, but feel free to make it your own and use any village of your choosing.

Ever wondered what it would be like to play as a monster? Look no further because A Monstrous Escape has you covered.

In this monstrous adventure, players wake up to
learn they are flesh golems cobbled together with body parts from different creatures. They must escape the castle of their twisted “creator”.

A Monstrous Escape is an interesting spin on the “what exactly makes a monster” trope and plays with the philosophy of humans being the real monsters in some scenarios.

with Tons of original artwork, NPCs,
lore, and more… And escape!!!

What are you waiting for!

Victor has been driven mad by the escape of his experiments, twisting his own body into a new twisted form. He is determined now to kill or recapture the experiments so that he can continue his work. The only way to stop him is to kill him or he will hunt the characters to the ends of the world.

Created as a vicious guard of his twisted experiments by Victor, as well as an experiment in surgically grafting together creatures. The result was less than ideal. Instead of creating an obedient guard, it was nothing but a mindless beast filled with rage from the unnatural
experiment that was carried out on it, forcing Victor to lock it away.

Each floor hids its secrets. Disover the building up to the rooftop, connected by stairs.

Several detailed tables allow you to build extra monsters to stalk the halls of Böserort Schloss Castle. Such monsters can be used if you wish to introduce more challenges for the players or to rebalance encounters for a bigger group of players. They could be Victor’s earlier projects that have escaped. 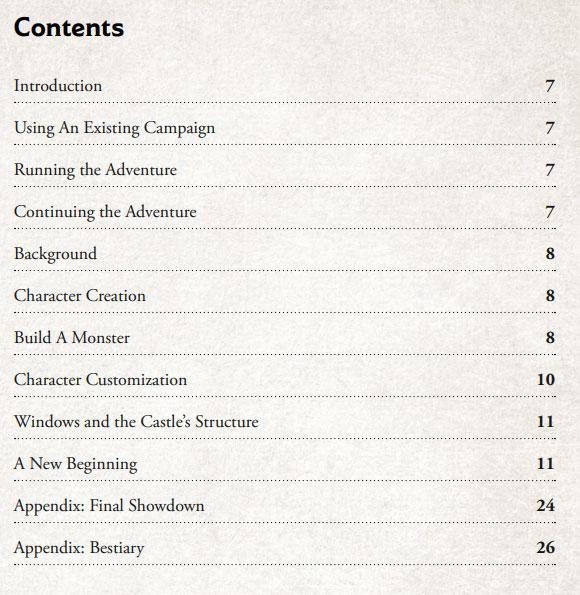 Victor Schlägerman has been creating flesh golems for a dark entity amassing a great army or a clandestine organization seeking to create the perfect assassin. People have started disappearing from one of the characters’ favorite settlements. A hunter recently discovered a dead flesh golem in the woods. Soon after investigating the remains, the characters receive a shared vision or a common dream. That dream plays out as A Monstrous Escape.

Victor found a cursed tome of forbidden lore that included instructions on creating flesh golems. The tome could act as a vessel or conduit for one of your campaign’s antagonists. A Monstrous Escape could serve as a flash back to Victor’s earlier experiments. By the time the characters in your campaign meet him, years have passed and his research has progressed significantly. As have his evil ambitions…going so far as to use the family members in his castle for spare body parts. Victor’s deep desire for praise and recognition has driven him truly insane.

Whatever path you choose when running this adventure, may your game contain fun and horror in bountiful measure!

There are no reviews yet.